“These algorithms naturally simulate every aspect of the sound of a real enclosure – from the early reflections, to the natural way in which the echo density increases with time, to the smooth decay of the reverb tail,” says Tony Agnello, the Reverb 2016’s designer.

The 1U, 19” rack-mountable unit provides 24-bit DSP, 24-bit analogue audio I/O, digital I/O, and a MIDI interface and has an extremely easy-to-use user-interface with dedicated controls for each of the effect’s parameters.

So what do you get?

Looking at the front panel, at the far left there are two columns of LED indicators to meter input levels with individual Clip indicator LEDs for each channel. Above these meters, the Dig In button lets you switch between analogue and digital inputs, and an associated yellow LED lights up when digital is selected. Algorithms that run in mono sum the inputs before processing and light the yellow front panel LED (marked Mono), which is positioned just to the right of the meters. To the right of this, there are rotary controls for Input and Output levels, with a Kill button (with associated LED) to mute input to the reverb, and a Bypass button (with associated LED) positioned above these.

The five main parameter controls for Mix, Pre-Delay, Decay (RT60), Position (which adjusts the arrival time, energy, frequency response and diffusion of the early reflections to give the impression of being close to the source, far away, or anywhere in between) and Diffusion, are located centrally, with controls to the right of these for Low and High EQ.

When you press any of the five main controls, it displays the current parameter value for a few seconds on its associated LED display – and, of course, while you turn it to adjust the value. The EQ works a little differently: just push the EQ control in and turn it to set the Frequency, then let the control come back out and use it to control the Gain.

A button to the right of the EQ lets you switch between Stereo, Room, Plate and New reverb types as indicated by the four LEDs above it. Next along, a numerical display with a large rotary control lets you select the Presets. Factory Presets are located in memory slots 1-89, with User Presets in slots 90-99 that can be overwritten or reset to the factory originals. Underneath this numerical display, two buttons marked ‘System’ and ‘Save’ offer control of the system parameters. Finally, at the far right, there’s an On/Off button.

The back panel features balanced TRS and XLR stereo analogue I/O sockets with an associated +4/-10 input level switch, together with S/P DIF coaxial I/O sockets, a pair of MIDI In/Out sockets, a TRS footswitch jack (for Kill and Bypass), and an IEC power socket.

The Sample Rate of the digital output defaults to 44.1 kHz but it can output at 48 kHz using an external clock. The digital input also works at 44.1 or 48 kHz, while the processing runs at 40 kHz internally to better re-create the sonic character of the original hardware.

How does it sound?

Now here’s the best thing about the Reverb 2016 – it just sounds SO good, as we discovered in the Dr. Mix blog video. On a basic TR-8 Kick/Snare pattern, the Stereo Room sounds very clean and ‘solid’, and doesn’t sound ‘mushy’ as you increase the Decay. The Position effect works really well, and together with the Diffusion parameter which controls the ‘density’ of the reverb, it took just moments to create a truly magnificent-sounding TR-8 bass drum! The standard Room Reverb and Plate also get a ‘thumbs up’: again, lots of flexibility, even without adjusting EQ or Diffusion it sounds good – a very ‘believable’ room sound, actually! And the Plate and does sound like a plate, with simple controls that make it really easy to dial in settings that ‘float your boat’. This is why the original SP2016 won such acclaim, but what about the new algorithms? Well, we are convinced! The new Stereo Room sounds ultra cool, the new Plate sounds totally unique, and the new Room sounds fantastic, especially on voice. Actually, all the new algorithms sound really lovely and very musical to listen to! 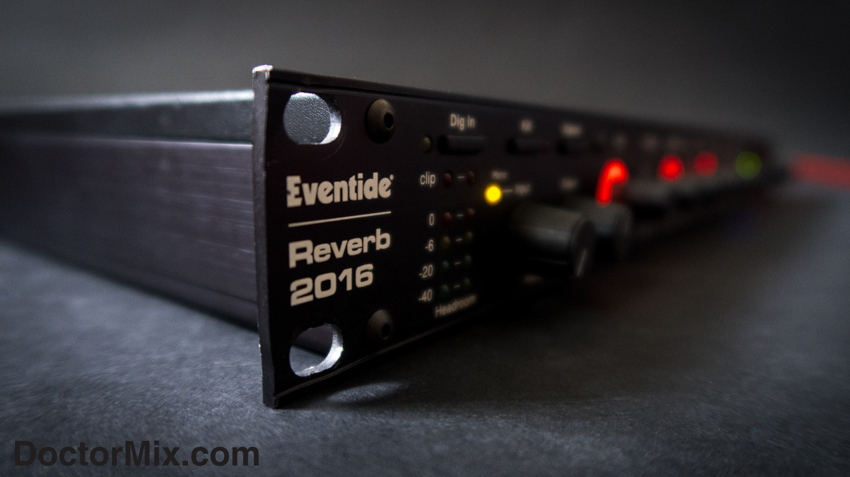 Ultimately, this box really ‘does what it says on the tin’, providing sensible reverb algorithms to suit most common applications on vocals, instruments, drums, and overall mixes, and it has some neat technical features while retaining ultimate ease-of-use. “Like what?” I hear you ask – well, the Predelay can follow a MIDI clock, for example, and the Position control makes it really easy to move mix elements from closer up in the foreground to more distant in the background. So, yes, Dr. Mix loves it!

Just as with the hardware version, the Eventide 2016 Stereo Room reverb plug-in offers a natural and distinctive-sounding room reverb with simple, intuitive parametric controls that allow you to fine tune the perfect space for your sound – whether it’s a dark hallway or a bright studio vocal room – and the reverb algorithms all produce complex early reflections with smooth decay tails that easily ‘sit’ in any mix.

In the Levels section at the left of the front panel you get stereo L + R LED-style meters with a Digital Clip indicator, a Kill button for quick effect audition, an Input gain control and a Dry/Wet Mix control. The Reverb controls in the middle include a Predelay control to add a delay before the reverb, a Decay(RT60) control to set the reverb time, a Position control for precise mic placement in the virtual room, and a Diffusion control that alters the character of the space from ‘sharp’ to ‘rich’! The EQ block at the right offers separate corner Frequency and Gain controls for the HF and LF EQ bands.

Originally designed for the SP2016 rackmount unit which has been used on hit records for decades, the 2016 Stereo Room plug-in features hand-crafted artist presets from Joe Chiccarelli, Dave Pensado and George Massenburg – our favourite being George’s gorgeous “Vocal Special” reverb! 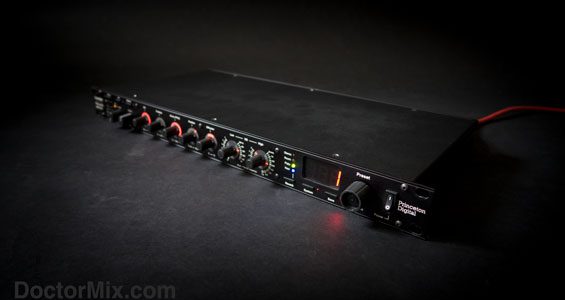 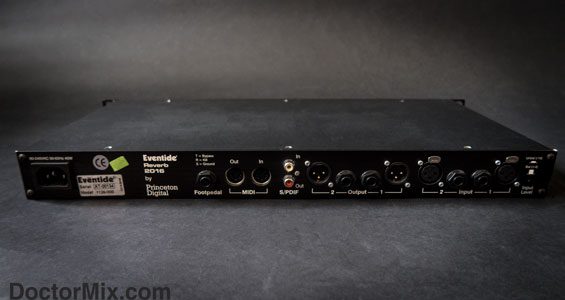 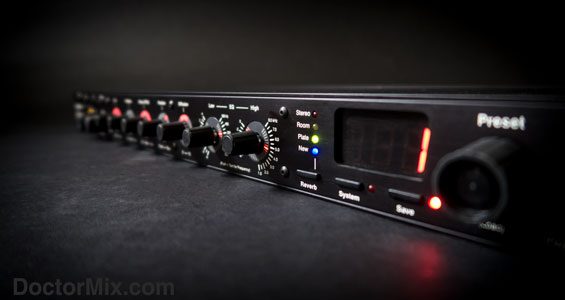 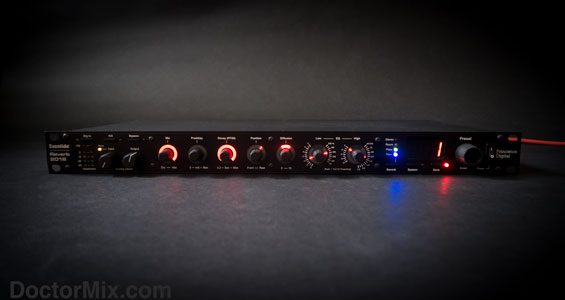 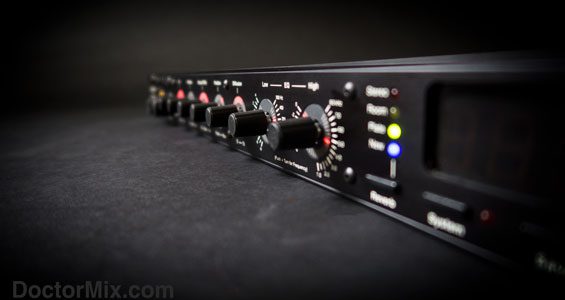 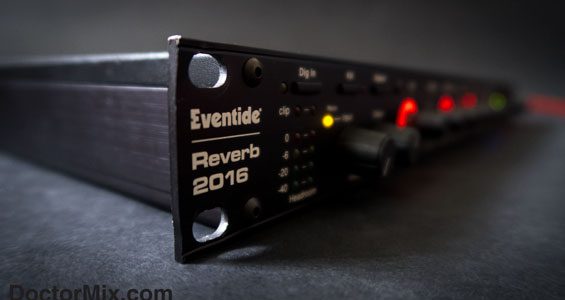 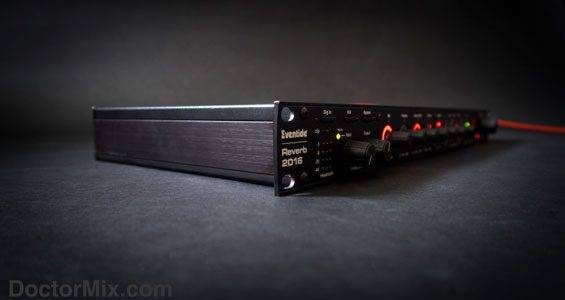 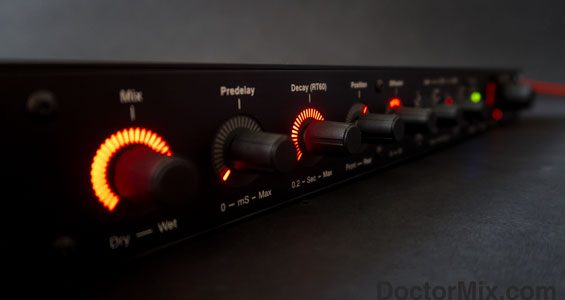 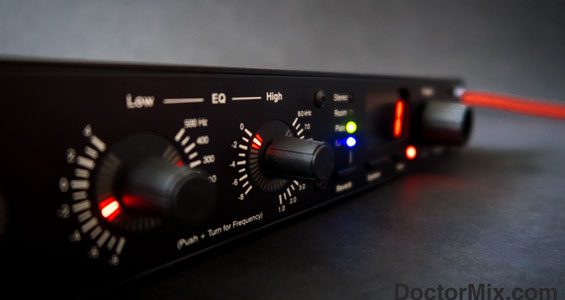 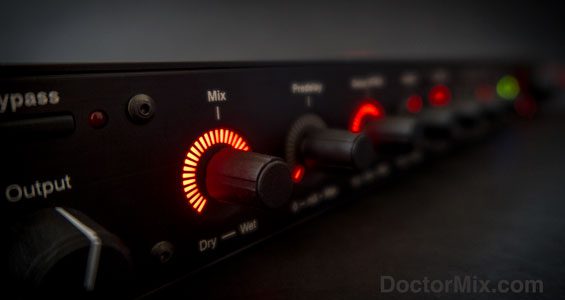 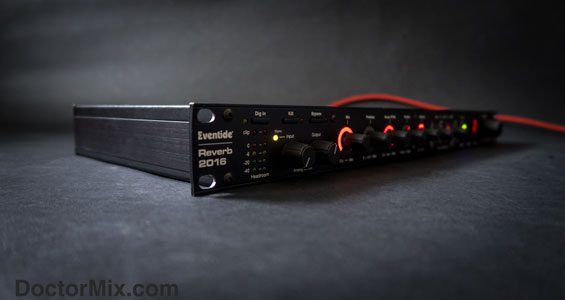 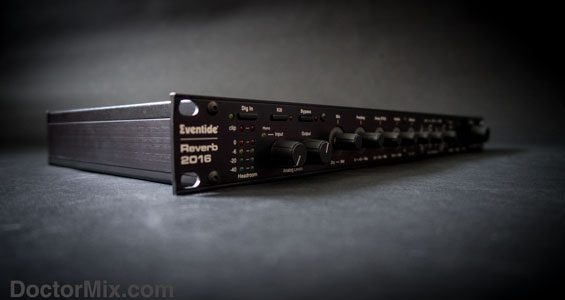 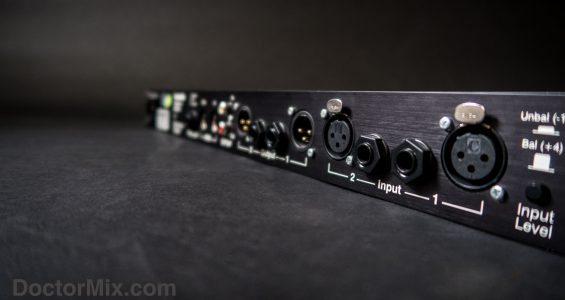 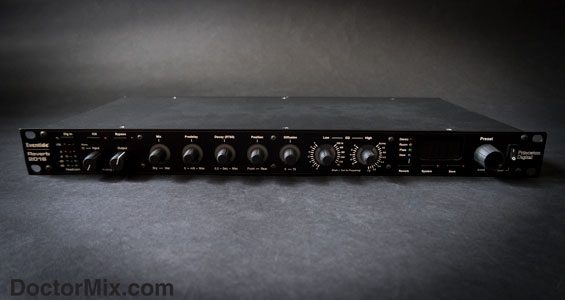 More info on the manufacturer’s page.