As one of the most iconic tape delays ever designed, the RE-501 is the last child of Roland’s dynasty of electro-mechanical effect processors. With onboard chorus, spring reverb and noise reduction, this unit sounds so lush… it’s hard to go back to anything else once you’ve tried it.

This box contains a specialised tape recorder that can create delay effects, commonly known as echoes, together with a spring reverb and a chorus effect. To create the delay effects, incoming audio is recorded onto a loop of magnetic tape then replayed via one or more playback heads before being erased by incoming audio as the end of the loop is reached. The delay time between echo repeats is adjusted by varying the tape speed. The length or intensity of the echo effect is adjusted by changing the amount of echo signal fed back into the pre-echo signal.

Picture shows the RE-501 with the lid removed to reveal the tape tank and tape transport.

A unique feature of the Roland tape echo devices is that the tape loop is contained in a special ‘tank’ or chamber where it is free to move around as the tape is moved across the record, playback and erase heads by a capstan drive – unlike other tape echo devices that use, for example, cassette-style tape cartridges with the tape wound onto spindles. Allowing the tape to move more freely produced less wow and flutter and reduced tape wear. This design also allowed for a much longer tape length making it possible to create echoes over three seconds in length. These features gave the Roland devices a distinct advantage over their competitors. 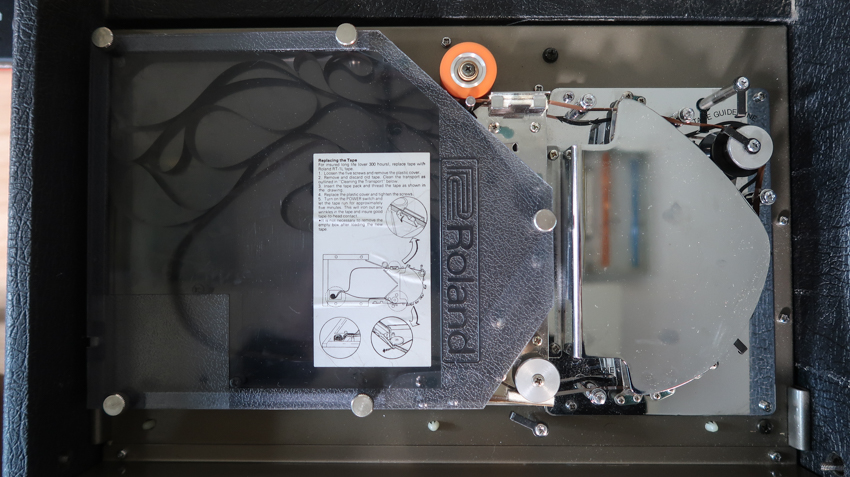 Picture shows a closer view of the RE-501’s tape tank and the tape path across the heads.

Back in the 1960’s, when I started out playing guitar, there were several echo devices available, including the Binson Echorec (which actually used a magnetic drum recorder – not tape) used by Hank Marvin of The Shadows and Dave Gilmour of Pink Floyd, the oh-so-clean Dynacord Echocord, and the ‘working musician’s tool’ – the WEM Copycat. I never actually owned any of these, but I did use other people’s and tried them out regularly in the guitar shops. In the early 70’s I bought a Maestro Echoplex EP3 after hearing this used by trumpeters Miles Davis and Don Ellis, then somewhere around the end of that decade, I bought a Roland RE-201 Space Echo (first introduced in 1974), which was a lot quieter than my Echoplex and offered more interesting delay patterns – but I did miss the Sound-On-Sound capability of the Echoplex!

Roland quickly addressed that shortcoming and introduced the RE-301 in 1977, which added a sound-on-sound facility and a chorus effect, was re-named as the Chorus Echo, and featured dual outputs via a pair of unbalanced 1/4″ jack sockets on the front panel.

In 1980, Roland introduced the RE-501 Chorus Echo, which used noise reduction circuitry to make it even quieter and added a second mono input and an additional mono output via a pair of balanced LINE-level XLR connectors.

Picture shows RE-501 the delay controls on the front panel.

At the far left of the front panel there is a balanced XLR (+4 dBm, 600-Ohm) Input connector and a balanced XLR (+4 dBm, 600-Ohm) Output connector that carries a mix of the DIRECT input signal and the effected output signals. These use LINE level signals to allow the RE-501 to be connected (in mono) to an external mixer or other professional audio devices. To the right of this is a single unbalanced 1/4″ Input jack with an associated Input Level Selector. Settings include -50 dBm for microphone, -25 dBm for guitar, and zero dBm to let you connect a synthesiser or mixer.

The Chorus effect has an INTENSITY control, and front-panel buttons nearby let you select the Chorus, Echo or Sound On Sound effects. There is a rotary ECHO MODE SELECTOR switch with six different effect settings. Settings 1-3 are single delay modes that engage the first, second or third playback heads, while settings 4-6 are multiple delay modes that engage playback heads 1 & 2, 2 & 3, or 1, 2 & 3 respectively. An associated ECHO/Sound On Sound VOLUME control lets you set the output level of the effected signal. A toggle switch just underneath this lets you select a single ‘slap back’ echo or repeat echoes – in which case the INTENSITY and REPEAT RATE controls become active.

Video shows how to replace the tape on the RE-501.

The REPEAT RATE control lets you adjust the tape speed to control the repeat times of the echoes – i.e. the delay time. If you turn this while audio is passing through the device, you can hear the pitch of the echoes changing as the tape speeds up or slows down, and this is a ‘cool’ sound in its own right! The INTENSITY control increases the number of echoes as you turn it clockwise, i.e. you hear more repeats (actually, it reduces to what extent the erase head erases the tape: completely, allowing no repeats, or partially, allowing some). At maximum intensity, this acts as a feedback loop, sending the echoes into a state of oscillation that builds up and up… A REVERB VOLUME control lets you control the level of the spring reverb and a pair of BASS and TREBLE controls let you ‘brighten’ or ‘darken’ the sound of the echo repeats.

Two 1/4″ unbalanced jack outputs are located at the lower right of the front panel. Output A, if used on its own, has a mix of the original DIRECT input signal together with the ECHO, REVERB and CHORUS effect outputs. When Output B is also used, this carries the ECHO, CHORUS and Sound On Sound (SOS) outputs, while Output A carries the DIRECT, REVERB and CHORUS outputs. This configuration provides stereo chorusing with separate DIRECT and ECHO outputs, because the DIRECT, REVERB & CHORUS are output via A while the ECHO and SOS are output via B. An associated switch is provided to set the nominal output levels to -10, -20, or -35db.

Download the Roland RE-501 user manual as a pdf file here.

Order Mixing & Mastering today and get the awesome sound of real tape delay on your music.
Send us your separate tracks, tell us what kind of effect you like and we’ll mix it in for you.

How to make your mix sound professional: 10 Essential Tips